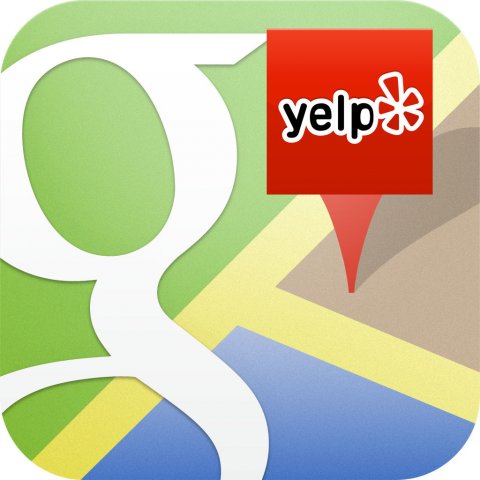 The highly anticipated iPhone 5 has come with several new features; a bigger screen, faster operating system, lighter design, and a list of other new tools and gadgets.  As a business owner though, one thing you might of noticed has or will catch your attention sooner or later- Yelp is now the main source of business information on the new Apple Maps tool! Gone is Google Places, which has been the most targeted network for local businesses the last 10 years.  What does that mean? A lot if you never considered Yelp important, which no one has recently since Google Places launched a few years ago.

So how does this impact your business? Well, for starters, if your business is not listed on Yelp, you should do it now! When someone searches for a business address, phone number, or location information, Yelp is now fully integrated in the new Apple Maps app.  Google is now not only not integrated in Apple Maps, it is also not providing driving directions on the phone itself.

Is Yelp a good thing or bad thing for your business?? Well, for many business owners, including myself, Yelp is both a plus and a minus, depending on your experience. For starters, anyone can leave a review on your Yelp listing, good or bad, with no consequences.  I have had a lot of clients who had an ex employee or even a competitor write a damaging review and Yelp cannot remove it, as per their “guidelines”. Why? Well Yelp isn’t really a business directory, its a social network. Since people run Yelp, the company does not oversee or approve both good and bad reviews.  It has an automated system that regulates reviews and wants to show “balance”. So, even if you have 4 new customers write great reviews about your company, the bad review will still show on top in order to show the reader a fair analysis. But, as you have read, there is no filter for bad press, so if you run into this situation, it can be damaging for your business.

Now thats not to say Google Maps and Places was all fair. There was and still is a lot of bad practices and similar bad tactics used. But, unlike Yelp, Google has a special team that eventually hears and settles complaints from business owners. There has been no indication from Yelp that they are going to legitimize their business listings as of yet.

I see it as a personal attack on Google considering the current Apple vs Samsung patent lawsuits going on.  As you may have read, Apple is suing Samsung, which has smartphones running on the Android OS, the arch rival of the Apple OS, over similar features found in their phones.  I have to suspect that alienating Google from one of the most used iPhone apps is a direct hit to Google in order to strut their muscle. For business owners, it may be a time to either panic or become more active in this new trend that is surely going to affect every local business.

What can you do? Well, taking a strong and new approach to Yelp is key.  Regulating and cleaning up your Yelp page is the number one priority.  Many have said that if you become a paying Yelp customer, it is easier to get the Yelp team to help you with negative reviews. That, to me, makes sense. The first step is to CLAIM YOUR LISTING. you do this under a free Yelp business account, not a regular account. Go to http://biz.yelp.com to set it up.

You must monitor your Yelp account constantly now, as much as your Google Places accounts.  Yelp is now positioned to re-emerge as a strong local search player, so stay up to date on new tools that they are surely to deploy soon.  Most importantly, get new clients to write positive reviews, because sooner or later you are going to run into a situation and you do not want the negative marks to hurt the ability to product business!

Contact us if you need help setting up your Yelp Action Plan today.

We are now Shopify Plus Partners!